US Navy Enlisted Insignias by Rank

US Navy Officer Insignias by Rank 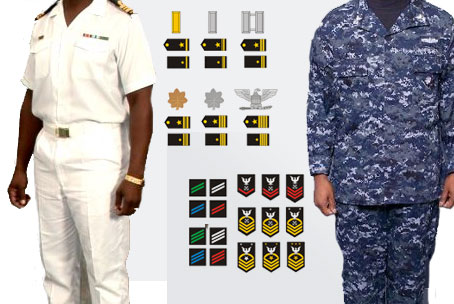 Note: As of September 29, 2016, the U.S. Navy chose to standardize their rating system to align with how the Army, Marine Corp, and Air Force categorize their servicemember's rankings. As we know, enlisted men and women included in the E-1 to E-3 pay grade were previously referred to by their Navy rate title. Each pay grade was separated into 5 groups: Seaman, Fireman, Airman, Constructionman, and Hospitalman. Today, they removed 4 groups and abolished the rating system. Now, the lowest naval ranks are all defined as a Seaman.

Warrant Officers (W-1 to W-5) are qualified senior enlisted personnel who are within the E-7 to E-10 pay grade, have completed at least 12 years service, and are in good moral standing.

"Today, as commissioned officers of the line or staff corps, Navy CWOs possess the authority and are qualified by extensive experience and knowledge to direct the most difficult and exacting operations within a given occupational specialty.  Although intended primarily as technical specialists, CWOs may also serve as division officers, department heads, OICs, X0 and CO, ashore or afloat."

"The term Commissioned Officer generally refers to members of the Navy or Navy Reserve who have a degree from a four-year college or university as a minimum educational requirement and have gone through Officer Training."